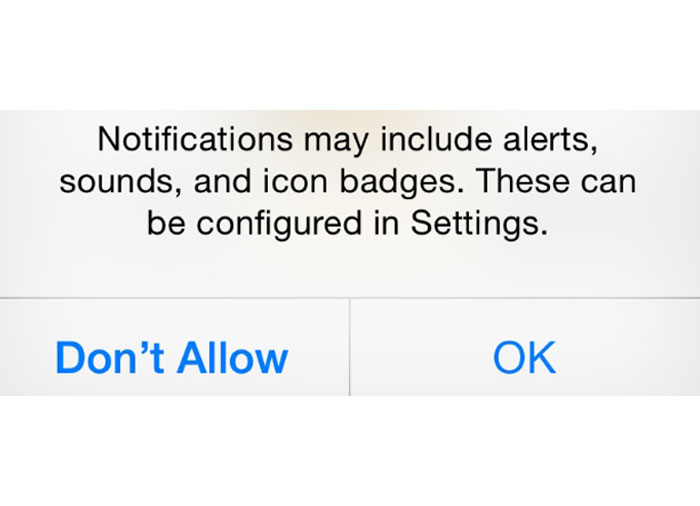 As game developers, we do everything in our power to increase player retention rates—optimizing core loops, creating compelling new features, and re-targeting campaigns, among many other things. One powerful tool is the notification channel: developers who implement a solid push notification strategy can reap the rewards of a highly engaged player base. For example, Clash of Clans lets me know when my troops are ready, so it’s a no-brainer, right?

Well, that’s just it. Since notifications are everywhere, players are increasingly less likely to give permissions to let us send notifications. In fact, the average opt-in rate in 2014 was only around 33%. And since iOS8, developers need to ask for permissions for local and push notifications, and even to place badges on players’ home screens. What’s a hard-working developer to do?

We’ve found that best practice for notifications centres on two key things: getting the highest opt-in rate, and sending relevant and non-spammy notifications.

Getting to Yes: Timing and Context One way to achieve this is through use of the pre-permission dialogs. These are developer-created dialogs that serve to educate the user. This solves two problems. First, it allows developers to give context to the permission, to tell users why you want it: for example, to tell them about when it’s their turn or when a reward will be ready. Second, it allows us to ask again. When they say no to the soft prompt, we can ask again a few sessions later.

Depending on the type of application or game being built, the timing of these prompts is also up for debate. If the app relies on communication between two users—as in asynchronous multiplayer games—then asking for the permissions early in the life cycle of the game is important. If the game uses notifications to alert the user to timers on resources, then prompting the first time a user creates a timer for a valuable resource would be key. By using the pre-permission dialog, you gain the ability ask more than one time, after which the user may have experienced enough gameplay to grant notification permissions.

Users know that notifications can be spammy. To gain user trust, a developer can frame the idea of notifications as something more useful. For example, in Farmville 2: Country Escape, the game asks the user to subscribe to Farm Reports. Farm Reports are notifications about resources and other timers, but the player is told about this channel in a more game-specific manner.

Even contextualizing notifications as something as simple as an “alert” can drive conversion to notifications. In the game Cartel Kings by Eight Pixel Square, the opt-in funnel is triggered by the player pressing the “set alarm” button in the daily reward feature. Letting the player discover notifications in a way that is contextually relevant to game play should increase opt-in rates. It’s not necessarily a race—developers should aim to have their best players opt in to notifications in order to re-engage them with push notification campaigns. Getting opt-in is only half the battle. If a developer sends too many notifications that the player considers spam, the player will deactivate the permission, or—worse—they will delete the app. Therefore, while we should send notifications to the player, we must send only relevant ones. For apps that want to send many notifications, the best practice is “batching” them. For example, if four buildings are going to be built within five minutes of each other, instead of sending four notifications (one for each build), only one notification should be sent, alerting the user to all the buildings: “Your Town Hall and three other builds are finished building!”

In a world where every app wants to send notifications, players and app users are very wary of giving these permissions to developers. Getting opt-in is about setting a relevant context and timing notifications in an optimal way. And if a player opts in, then developers ought to respect this privilege by sending only relevant and non-spammy notifications: this will keep their most highly engaged players coming back for more.