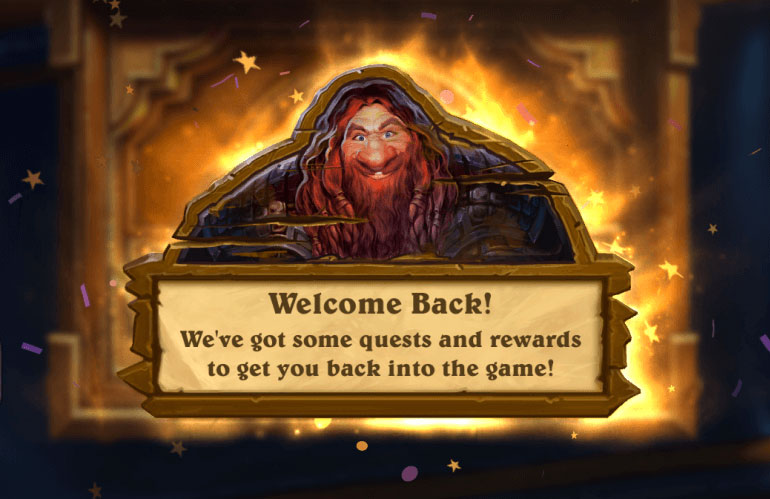 Hearthstone was a major win for Blizzard – they entered both the mobile market as well as the trading card game genre, accumulating positive feedback from players and critics alike. Giving Magic: The Gathering a run for their money is not an easy feat; however, as most free-to-play game developers eventually begin to realize, installs dwindle and DAUs slowly start to shrink. Accelerating this decline with Hearthstone was the introduction of the “Standard” format, which created a game format that invalidated a lot of the elder players’ collections.

Because of this, it’s possible that the Standard format created an influx of players leaving the game and not playing for 30 or more days. In the industry, we name this types of user a “lapsed player.”

As Hearthstone gets older, they begin to prioritize re-engaging the former players, as the market for new players begins to shrink. They’ve tackled this problem by using a re-engagement flow, which acts as a mini-tutorial for these lapsed players.

In this article, we will walk through the various steps in the lapsed user re-engagement flow that Hearthstone has implemented, and showcase the best practices so you can apply the same methods to your own game.

The point of the lapsed player re-engagement flow is to be able to smoothly re-onboard players who might have forgotten the rules, or to give some free rewards to kickstart their collection again. Just as in the tutorial or FTUE, it’s important to give early wins and free currency to let the player experience the fun win moments (again). In Hearthstone, that’s busting open packs, and by simply opening the game again, the game gives you around packs (around $35 dollars worth of stuff).

Step 1: You MUST Complete the Lapser Tutorial After a familiar innkeeper welcomes the player back (showcasing that it’s very much a transparently forced flow), the player lands on the homepage with 3 new challenges to complete. The challenges are named fictionally-relevant “Return of the Hero,” since this is a re-engagement flow, and highlight the rewards for doing so. or to play against real humans. Also, the player is given a pre-made “Innkeeper’s Deck” to battle with; the purpose of which is to give the player something less complex to play with, relearning the core mechanics and utilizing basic cards. The games played in these tutorial matches are very easy to win and also include interactions with new hero skins, and while the cards included are ones that were likely used by the player a year ago, they slip in a few newer, yet simple cards to interact with. Finally, when the player is finished with all three demo matches, they are rewarded with packs and sent to the main home screen that they are familiar with.

With the introduction of the Standard format, Blizzard effectively copied the tournament structure of the most popular Magic: The Gathering format. Decks created for Standard must be from the 2 most recent Hearthstone expansions, and when a new one is released, the oldest one is rotated out. Depending on how long the player has been inactive, many of their cards could be not legal to play anymore. The Hearthstone app showcases a dialog informing the player of what’s been changed. In addition to the full set names, Hearthstone even goes into which are the important cards that players had previously played with or against, describing them as “Hall of Fame” cards.  “Moving to Wild” refers to rotating out of the Standard format, but you can still play with all the cards in your collection when selecting “Wild” as the format.

While the initial re-engagement flow included an “on-r ails” experience, this next step continues to guide the user through a relearn of the core loop , in a less heavy handed way. By using the familiar quest system, the lapser is shown two easy quests to complete in succession, which also rewards a lot of free gold and packs. Once the player completes these special quests, they are then given a normal quest as an additional quest to complete. The player should be able to complete all the quests they are given at this stage in the first session and should then have a modest amount of new cards from packs, and gold to play an arena run.

Pack Loot Drops: To Change or Not to Change

One thing that many Hearthstone players have noticed when opening packs is the concept of the “pity timer,” which ensures that no player will open 40 packs without getting at least one legendary card, the highest rarity. While Blizzard has not stated that this is the case explicitly, it’s accepted as true by the community.

So when the lapsed player gets his or her free packs from Blizzard, do they get a higher percentage of awesome cards? It’s unclear at this stage, but since the technology exists already in the game via the Pity Timer, it’s very likely that it’s the case. As a game ages, the priorities of new features change. The tutorial becomes less important to optimize since the number of new installs comes largely in the first few months of a game’s life. Instead, focusing on the user experience for old players – ones with some familiarity of the game but need a refresher – becomes most important, and Hearthstone is a good example of a flow that achieves this.

The three more important elements of a solid re-engagement flow are:

Segmenting the user experience of your game based on player behavior is always a good strategy. The needs of a new player and a needs of a long-term daily player are different, so any personalization you can add will increase your retention metrics.